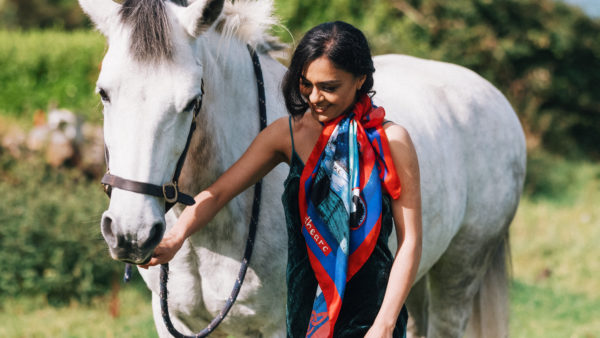 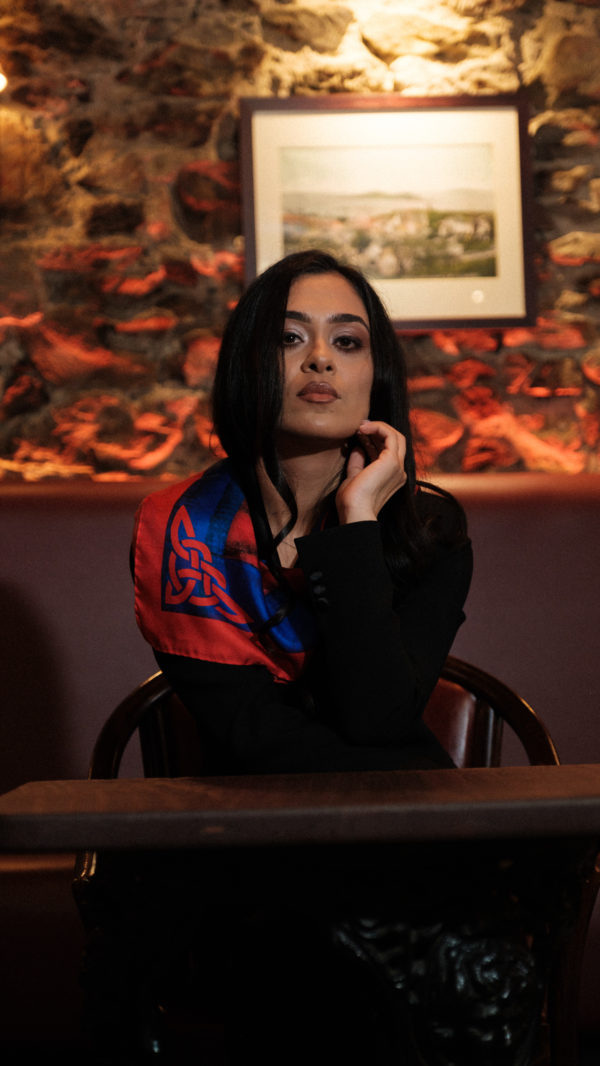 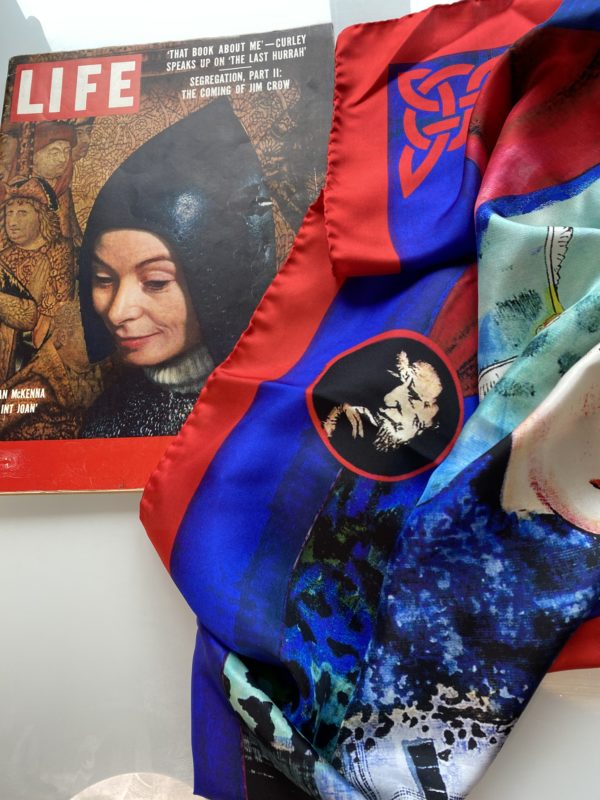 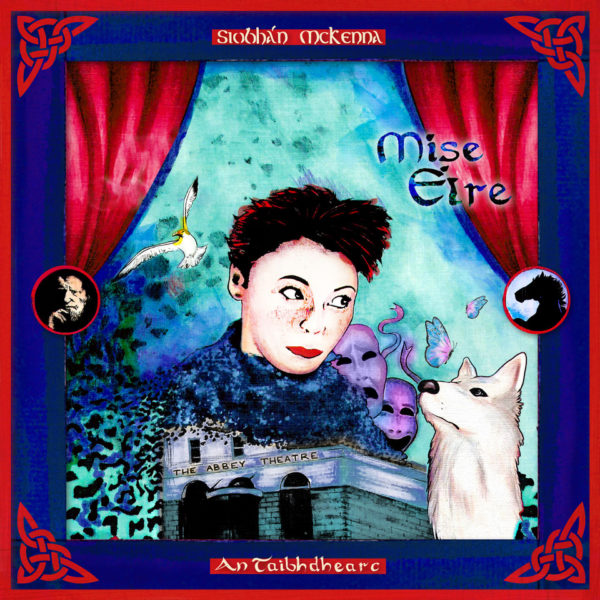 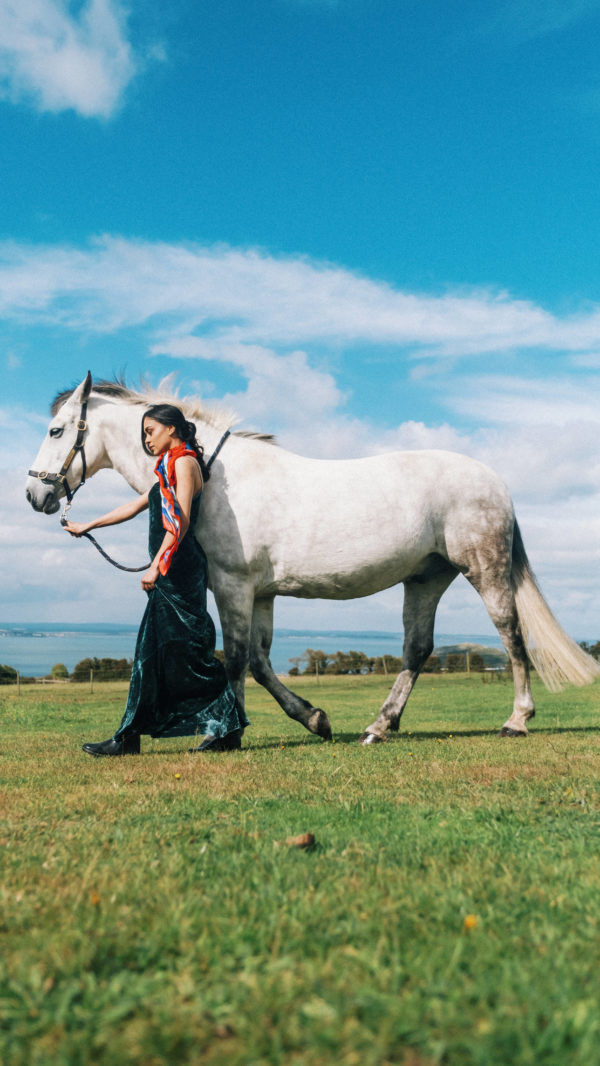 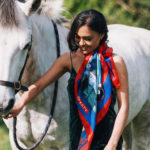 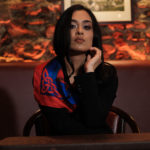 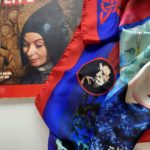 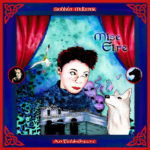 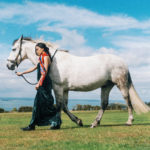 “Nobody is quite like her . . . from the moment of her appearance, watch her and she will set you on fire or she will leave you in a condition of strange, resentful, incomprehension. And this, to my mind, is the function of the artist.” Micheál Mac Liammóir

“Much of Brian Friel’s best writing approximates to music and Siobhán was perfectly attuned to the melodic flow between the past and the present, between daydream and reality.” Siobhán’s biographer, Micheál Ó hAodha, on Siobhán playing the Irish-American, Cass, in the play The Loves of Cass Maguire, by Brian Friel.

Created to commemorate and celebrate, Siobhán McKenna and Irish Theatre. Siobhán and the theatre reflected Ireland as a land and nation. This design also captures elements of Siobhán as a woman.

The design went through many months of transformations and drawings in various mediums, which I then layered on top on each other for its final digitisation to be transferred to silk. Some elements of the scarf are obvious such as the theatre masks and the stage curtains, some are less so or have deeper meaning than face value.

Below you’ll find the symbolism behind each element.

Siobhán’s passion and high status in Irish theatre. I painted a blue as close to St Patrick’s Blue as I could. It is the official colour of Ireland and the Presidential flag.

An animal like print, abstract emerging from the roof of the theatre to Siobhán’s face as she portrayed Saint Joan. The animal print represents a primordial connection to soil, foundation, Siobhán is borne from the theatre – they are one.

Siobhán with her booming voice and searching eyes and physical presence was an actor that captured audiences. Her tragedian roles are powerful and unforgettable. However, in her private life she was a practical joker, loved laughing and enjoyed life’s silliness. She moulded the character of Pegeen Mike, with her impish flirtation and loved playing alongside actor and comedian, Maureen Potter in Arsenic and Old Lace.

Free-spirit, wisdom, courage, determination. Though born in Belfast, and lived much of her adult life in Dublin, Siobhán identified as a Galway girl – Galway is where her heart lay, and where she is buried with her parents. The Connemara pony is one symbol of Galway. A pony that is hardy, survives the harsh environment of Connemara, County Galway.

Siobhán was a social butterfly and loved meeting new people. She laughed a lot and always found the party – but mostly she started the party herself! It was something she was brought up with. The family home in Fort Eyre, Galway was a hub for neighbours, friends, students to gather, play traditional music and ‘have the craic’ (craic is a widely used word in Ireland, which means fun.)

Siobhán connection to nature and her ability to soar. She loved her pink house by the sea and swam daily. She would have heard the sounds of the waves and the seagull cry.

Siobhán’s dog, Rory. The dog symbolises loyalty. Siobhán was staunchly loyal not only to her friends but fellow actors, negotiating on their behalf and often helping them out financially when work was scarce. The loyalty of her fans watching her perform. The loyalty of her dog, Rory whom she adored. She’d even write postcards to him when she was away with work. All of this McKenna clan were animal lovers and Siobhán was no exception.

The National Theatre’s of Ireland

An Taibhdhearc – the national Irish language theatre of Ireland. Located in the heart of Galway. As a girl Siobhán loved the Christmas shows there. As an undergraduate in Galway University, she was offered a playing salary, but her father would not let her accept it, saying it was a honour to support the Irish language.

The National theatre of Ireland and where Siobhán was taken on despite arriving late, with cut knees and dirty hands after falling off her bike and a bad audition. It was here she caught the attention of Denis O’Dea (they married some years later). Siobhán performed numerous times in the Abbey throughout her career both as an actor, author and actor (Here are Ladies, All Joyce) and director (Peacock)

George Bernard Shaw. Choosing just one playwright from the rich pool of Irish playwrights was difficult. However, Siobhán was in awe of Shaw and wrote to him to ask his permission to translate his Saint Joan into Irish. He replied saying he’d no idea why anyone would want to do that but go ahead. Shaw said that Joan took possession of his pen as he sat to write her story in the Eccles Hotel, Glengarriff, Co. Cork. The Irish version of Saint Joan was a resounding success.

Siobhán first played the role in the Gate Theatre Dublin, and then in theatres around the world. If Shaw was guided by Joan of Arc in his writing, it seems Siobhán came into her own in playing the role. Shaw and McKenna were connected in some ethereal way to each other and Joan. It is commonly accepted that Siobhán is the Irish for Joan. However, the true translation of the name Siobhán is White Spirit. And in the Irish tradition of myth and the spirit world, this is where I leave you with your own conclusions and theory.

“Siobhán McKenna, the late, talented First Lady of the Irish stage nurtured a deep respect for the language, love of the land, and appreciation for Irish traditions, and represented the romantic, poetic and very Gaelic aspects of Ireland.”  – City of New York, proclamation, 1987

There are no reviews yet.